This is going to be a hodge-podge since it's been awhile...

I keep telling myself I'll post here more often, but then a month passes (albeit a short one) and I realize that I've failed again. I'm not sure why it's so hard to keep things up: I guess part of it is I feel like I don't have anything authoritative to say on WoW, since I've been playing for only about a year. So despite the fact that I've treated WoW like my other hobbies, meaning they become obsessions that I must learn EVERYTHING about, the game is so big that I still feel like I've just barely scratched the surface of things. So, I feel like it's probably best to leave the advice-giving and pontificating and guide-making to the since-Vanilla players, and keep my comments on my personal impressions of the game. However, I have formed what I feel are some informed opinions on upcoming changes with Mists of Pandaria, and I plan to post on that in the next couple of days.

Back to in-game, I got Wapsipinicon through the Cata content and dinged 85 a couple of weeks ago. Since then, she's been justice point farming for gear, as part of her long-term dream to do LFR. Cata normal dungeons have been a blast so far, but heroics have been a bit of a pain. My computer is old and has an integrated video card, so the game graphics are turned down, and combined with my slow reflexes, it's hard to dance around a moving boss and stay out of the bad. I do my best to stay alive and beat the hell out of everything, but it has been a challenge at times (please don't mention Zul-Gurub...)

Aside from that, Wapsi has been doing Molten Front and Tol Barad dailies and a little bit of PVP here and there, the latter mainly for mounts. Right now I'm kind of excited about mounts: 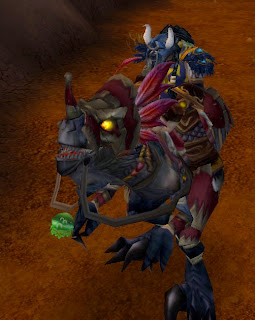 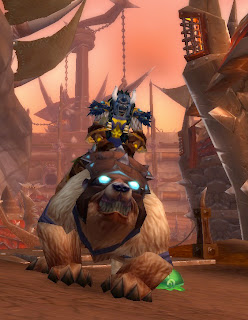 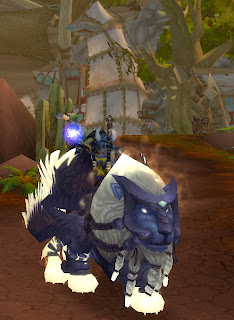 Winged Guardian from Blizzard Store, I know, I know. It's purty though!!

I'm going for the Albino Drake from the "Leading the Cavalry" 50 mount achievement and I want to get as many "easy" mounts as possible in order to avoid camping for rares and rep grinds as much as possible.

Back to PVP, I'm not the biggest fan, but I figure I can't lose doing the random battleground each day for honor and conquest points, which I can turn in for mounts and cool looking gear for transmogging. However, I'm starting to feel a little guilty about abandoning my poor goblin rogue Goetia, and having seen how rogues can pwn in PVP, I'm thinking I might make her all about the battlegrounds and get her geared up that way. She's also the farthest along in potential Explorer and Loremaster achievements, so I could work on those in addition to archaeology while queueing for battlegrounds. 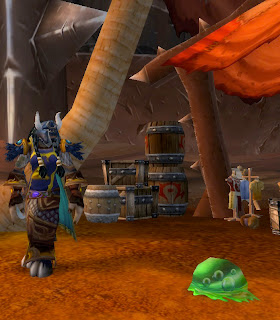 But Wapsi is still my main, and in addition to her battlegrounds and dungeons and dailies she is working more or less on the Chef achievement, the exalted Cenarion Expedition mount, and making money through mining so she can buy all of the guild heirlooms for alts.

All of these activities, however, have been solo (except for PUGs, which are a bit like one-nighters), and I have been craving more social interaction in game. Wapsi and Goetia both belong to guilds, but were recruited at random in Org so I don't know anything about my guildmates. Since none of my RL friends play WoW, I have decided to roll a toon on an RP server in hopes of meeting like-minded people in-game. So meet Milyra, of Wyrmrest Accord: 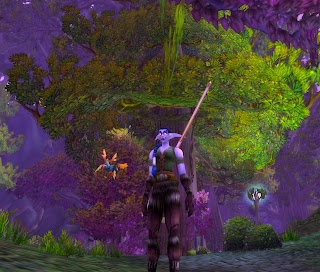 I decided to go Alliance with this toon since I had been kind of craving playing a night elf. Milyra is a hunter (pet not shown) who has fled Starbreeze Village in Teldrassil after it was decimated by Furbolgs. Her family and friends are gone, including her druid best friend who gifted her a Cenarion Hatchling right before her death. She's just entered Darnassus and is very much a country girl in the big city for the first time...wait until she gets to Stormwind City! For now, she's thrown her lot in with her night elf kin as they fight the corruption that has invaded their homeland.

I think that's it for now! More soon, I promise! 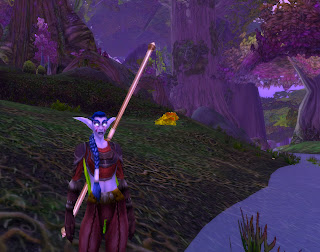 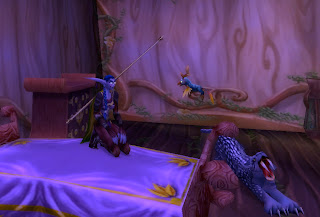 Posted by Wapsipinicon at 2:55 PM No comments: 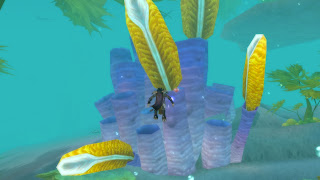 Both at work and in WoW, that is. Wapsipinicon is meandering her way through the Cataclysm zones. I hadn't done Vashj'ir before so Wapsi spent some time there as well as in Hyjal. What a beautiful zone, as an invertebrate biologist IRL I really enjoyed all of the colorful sea life. After doing about half of each of these entry zones, Wapsi did a tiny bit in Deepholm and several random dungeons and now she is level 84! They grow up so fast!

I've also been spending time on fishing and cooking dailies as I have dreams of achieving both the fishing and cooking metas on Wapsi. She's cleared Org and Thunder Bluff (and made exalted with both in the process), and is now working on Undercity and Dalaran. Speaking of achievements, she got the Lunar Festival "Elder" title and festival lantern and decided to show them off after drinking some mysterious potion she found in the sewers of Dalaran... 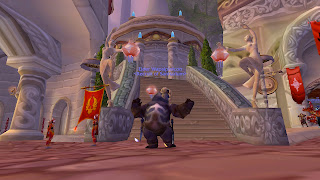 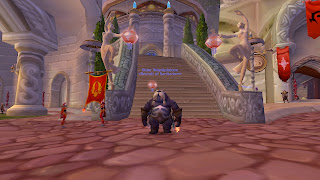 Finally, Wapsi has been searching the auction house for cheap greens for transmogging. After putting together this outfit, she succumbed to a fit of vanity and paraded around Orgrimmar Saturday night with all of the other l33ts... 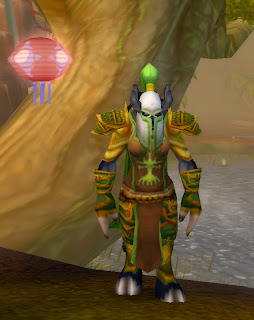 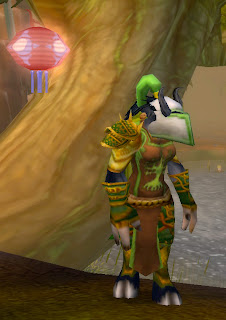 On the RL front, I'm wrapping up a short paper on CNS miniaturization that I will be VERY happy to have off my back, as I can finally start my tsetse fly study once it's done!
Posted by Wapsipinicon at 9:23 AM No comments: