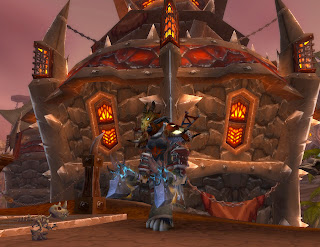 Super-shaman-y transmogged gear (including some JP shoulders from Shattrath City and 1 No'Kaled transmogged into 2)! Wapsi did Hour of Twilight heroics this evening for the valor cap, and it was a blast watching her run around and smash things after all of the priest healing I've done lately. In fact, I Wapsi looks so good right now that I decided to take the plunge and buy a FigurePrints statue of her... 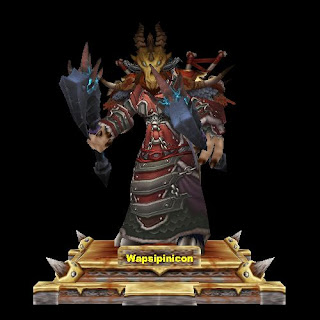 And yes, I've been busy with Blatella too, all of those dungeons builds up quite a bit of rep! 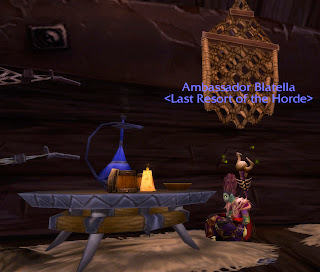 Posted by Wapsipinicon at 7:58 PM No comments: 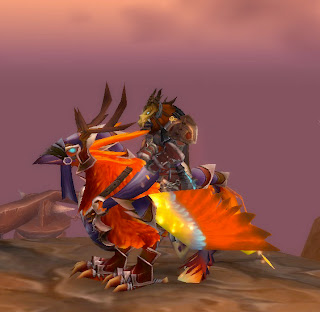 Wapsi finished her Molten Front dailies! I don't think I'll be doing that grind on any of my other toons. 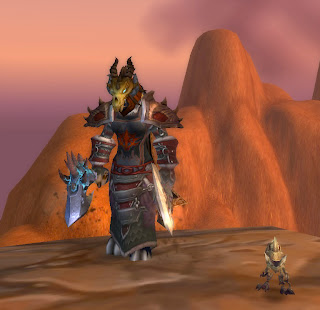 Also, a new transmog set. The helm, shoulders and weapons are as is, but the gloves and chest are part of the Outlands rep Seer's mail set. The belt is just something I picked up while leveling that happened to match.
Posted by Wapsipinicon at 8:02 AM No comments: 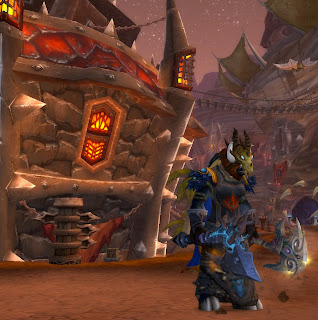 Some pics of Wapsi with her sexy gear. Spiritwalker's cuirass, No'Kaled, Zeherah's dragonskull crown, and a smattering of transmogged valor gear and heroic and LFR drops. It's not all for show either; she does pretty good DPS on the stand and fight LFR bosses (#2 on either Morchok or Ultraxion last night, can't remember), and is getting better on the other ones. 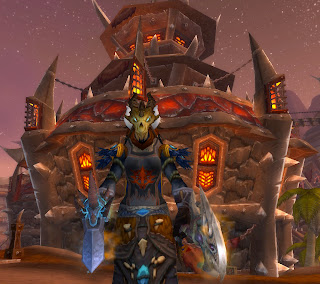 Rawr!
Posted by Wapsipinicon at 9:34 AM No comments:

Moar leveling, but I still love hitting things with axes 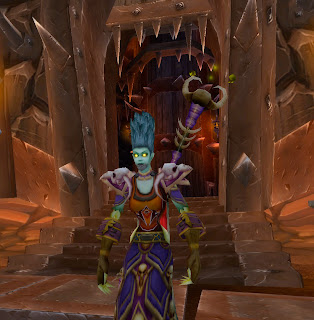 Most of my WoW time has been spent leveling Blatella the holy priest through the dungeon finder. The learning curve for the many kinds of heals she has has been a bit tough, but I am getting the hang of using Chakra and AOE heals. She dinged 70 a couple of days ago and began healing Wrath dungeons, and my oh my is everyone squishy! DPS are getting one-shotted on bosses and three-shotted on big mobs. Tanks are minimally better. I have time to cast Holy Word: Serenity on one of them, but if anyone else is in trouble they're going down. So I concentrate on keeping the tank up so he/she can hold aggro so we don't have a total wipe. It's stressful and it makes me feel like a fail healer, which isn't the reason I spend money on games. So...slowing down on leveling Blatella for the time being, back to just a level or two a week so I don't lose all of what I've learned. 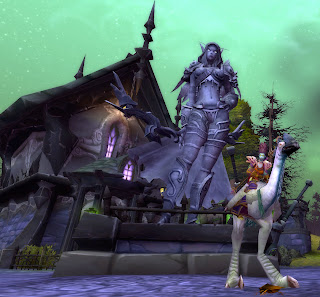 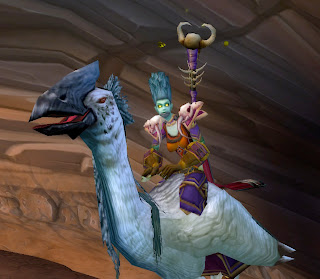 She did get her flying mount at level 60 (no problem with gold as her glyphs and dungeon gear have been selling well) and the Easter mount, the latter of which compliments her sickly undead color nicely. She even changed her hair to match! 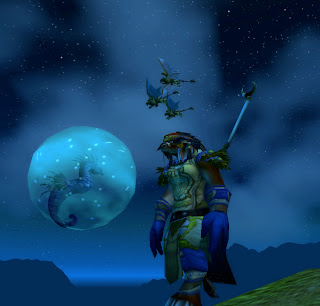 Boomhoof did a couple of dungeons this weekend as well, and is just one talent point away from boomkin form, which is the whole reason I decided to roll a balance druid. She's leveling her enchanting as well, towards my end goal of having a max-level enchanter, inscriptionist and alchemist (Wapsi), in addition to all of the gathering professions. Together, they should be able to earn enough gold to make leveling additional alts easy. 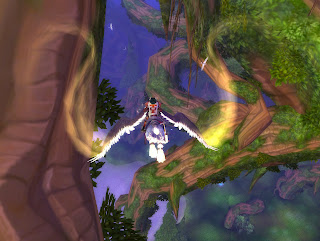 I haven't taken any pictures of Wapsi lately, so this one will have to do. She's nearly done with Hyjal dailies, thank Elune. She's maxed out her alchemy and will never want for flasks for heroics or LFR. Speaking of LFR, the past two weeks she's gotten good gear drops, including the tier chest piece and one No'Kaled.

That's about it Horde-side. I've just learned that heirlooms can be mailed across faction, so I'm thinking of having Wapsi collect the JP agility and intellect mail pieces, sending them to my dranei ret pally in addition the the strength plate I already have, and server transferring her over to Shadow Council with my Alliance hunter and baby elemental shaman.

All of that should really keep me busy until the next expansion. I finally got my beta invite, but I find I have plenty to do in WoW as it is.
Posted by Wapsipinicon at 8:20 AM No comments:

Now that Wapsi is beginning to get geared in LFR and Valor gear, there hasn't been a whole lot for her to do. Every so often she does the dreaded Molten Front dailies, she's chosen alchemy as her crafting profession (jewelcrafting wasn't working out) and has been speed-leveling that via the AH, but that's about it. Mostly just lazing around Org these days. I don't even have a recent picture of her! 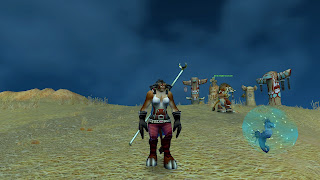 This past couple of weeks in Azeroth have been focused on leveling Blatella and Boomhoof. Boomhoof is a balance druid I started leveling with the bf, and when he ran out of steam I kitted her out in heirlooms and took her to LFG. Balance dps seems to be pretty crap at her level (mid-20s), but I'll persevere because I really want a max level boomkin. 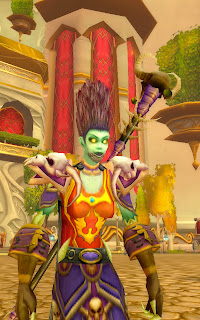 Most of my time has been spent on Blatella the holy priest who I am leveling solely through LFG. It's been a challenge- I'm really realizing how important it is to have a good tank who doesn't pull too much at once and holds aggro. I think I'm learning when to use different heals pretty well, and mana management hasn't been too bad, especially since I discovered that I can cannibalize corpses for mana- forsaken racial is OP!

I've also been enjoying playing Blatella since I think she's actually a really pretty toon; her green skin and purple hair match the heirlooms very well. I also like the idea of being an undead holy priest who eats corpses- kind of reflects my feelings on the dirty underbelly of religion. 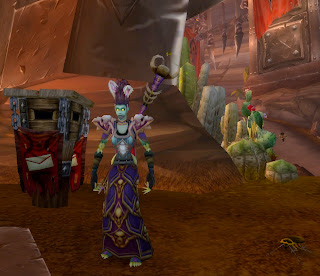 So between LFG queues Blatella has been half-heartedly participating in Noblegarden by collecting eggs for the mount- I doubt she'll get the 500 chocolates necessary and keep hoping she gets the random drop. It's kind of fun watching everyone running around the starting areas in new and old toons alike. 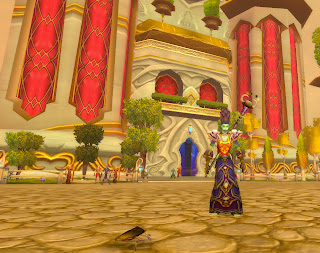 I decided to take her to Falcon Square to collect eggs as it's not too populated. It's a pretty place, kind of makes me want to roll a night elf... 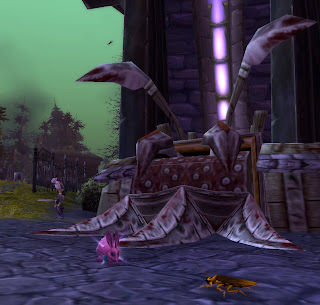 Anyway, back to egg collecting!
Posted by Wapsipinicon at 3:45 PM No comments: