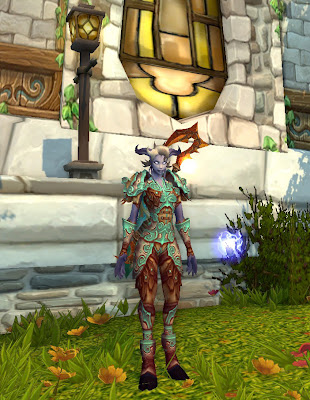 Boy oh boy do I love my newly dranei shaman! I've been healing dungeons with her and just decided to level 88-90 as elemental. While I'm still not sold on the elemental playstyle (I hate Lightning Bolt), Calyx sure does look cool while she's doing it. The dranei casting animations are a wonder to behold. Coolest of all is the animation for Unleash Elements, which is just kind of a meh swooshy thing on my tauren, but is an all-out YEEAAH on Calyx, with flame bursting up around her. I 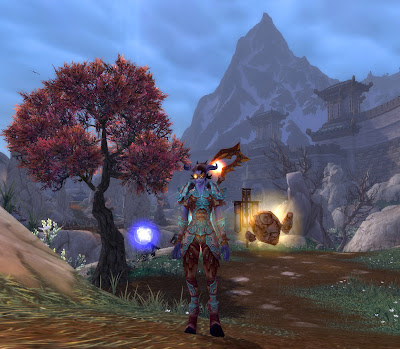 Like my enhancement shaman, however, Calyx is rather squishy during questing, even with pretty decent gear from dungeons, the AH and a hand-me-down Klaaxi staff from Mnium. I've heard it said before on the official forums, and I completely agree that shamans are rather hampered by the lack of an instant cast self-heal or bubble, something that many other classes have. I was amazed at how much less damage Calyx received when she had her Earth Shield from Ban Bearheart at the beginning of Townlong Steppes. Why do only Resto shammies get to have Earth Shield? Not only would it be extremely useful for dps specs, but it looks cool as heck swirling around at the same time as Lightning Shield like a little planetary system! 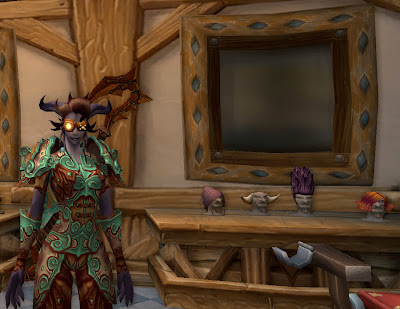 I just began questing on Calyx again recently, because the past few days I have been a bit obsessed with leveling her engineering skill. This is for one reason only- goggles! They look damned cool, and I have wanted to be able to equip them on one toon or another ever since I learned they existed in game. So here are her first transmogrify-able goggles, a BC recipe. Leveling engineering hasn't been as difficult or expensive as I thought it would be, since Calyx is leveling her mining at the same time. She has just begun Cata-era recipes, and will be looking for Obsidium in Mt. Hyjal as soon as she has finished leveling to 90. 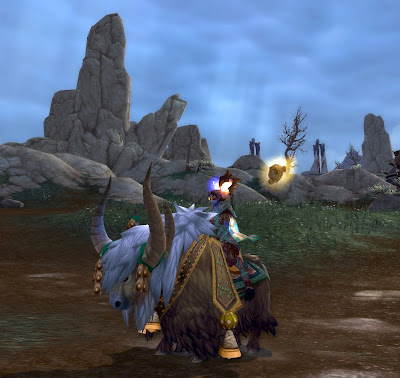 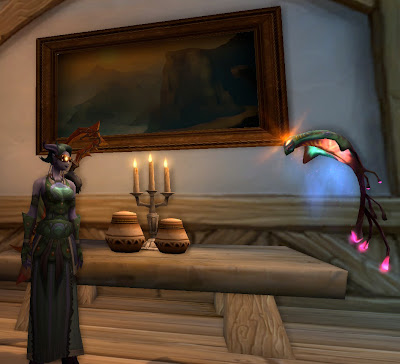 Leveling as elemental hasn't been so bad, despite my not being too enthused with the rotation. Maybe it's riding around on a yak, her cute little sporebat pet from back home, or her lovely new duds, but I'm enjoying watching Calyx run around slaughtering all the things. I'm reminded once again of how important visual aesthetics are for me- one of the biggest reasons this game has sucked me in is that I just really like how it looks. I may not currently be in a creative phase where I am making art of my own, but every time I log into WoW I feel like I am participating in a piece of art. Without this visual appeal, no amount of content and achievements would have kept my interest for so long.
Posted by Wapsipinicon at 1:53 PM No comments:

Little projects, a step at a time

This weekend I stepped back a bit and looked at my legion of alts, and decided that it was time to go with some small projects on a few of them, rather than diving into any more grinds. With work being super busy lately, I need to be conscious of not making WoW feel like another job, and focusing on what is enjoyable. That said, here is what I will be thinking about when I log into WoW this week: 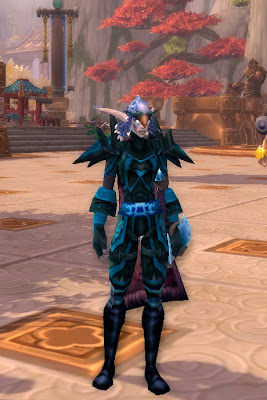 Mnium will not be doing any dailies, but she will be running LFR and continuing her BC dungeon trips for pretty transmoggery. She got the legs for the Bloodfang recolor set last week, and has the boots and belt left, from Auchenai Crypts and Slave Pens. Right now she's wearing the Clefthoof boots and a belt she found on the auction house, which look pretty good. She ran the holiday dungeon a few times last week while I was grading papers and finally received the 480 necklace- only to have a downgrade necklace drop for her in LFR. Oh well! 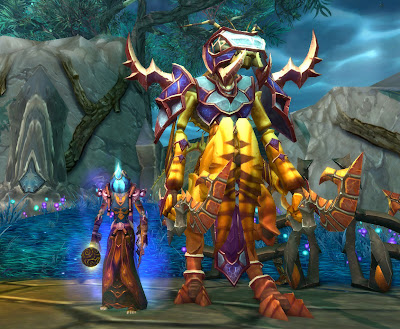 Blatella the Wakener! My tough little forsaken shadow priest finally got to exalted with the Klaaxi and is wearing her title and tabard proudly! She also had a great LFR week, winning a cape, trinket and boots, and collected enough valor for the Golden Lotus shoulders. Her luck prompted me to spend the money to get her properly enchanted, gemmed and reforged, and I'm looking forward to melting faces during some Shado-Pan dailies and LFR this week. 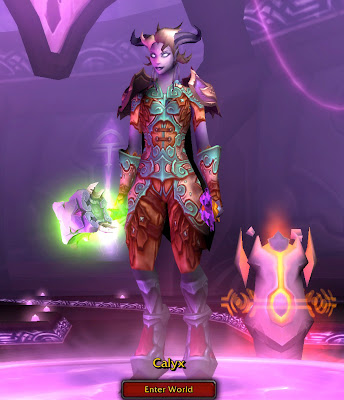 So I decided I needed a pretty little dranei! Calyx is formerly Panthalassa, who was formerly an orc and then a panda. Calyx also was moved to my Alliance group on Feathermoon, where the name Panthalassa was taken, thus the rename (I rather like the name Calyx, it's a part of the insect brain). She brought with her some cloth for Fossegrimme's tailoring, and Malik's Stalwart Spear that Blatella found while doing Klaaxi dailies. The spear will be for either my feral druid or my monk, whenever I decide to level them.

I don't feel much like questing right now, so Calyx, who is about halfway to level 88, is just healing some dungeons here and there. Resto shaman is much, much easier for me than resto druid was. Lots of big heals and cooldowns, once in awhile I lose a dps who got two-shotted by a boss, but otherwise healing with Calyx has been challenging but fun. I really like the intellect mail dungeon armor too, she just has shoulders and boots left to collect.

At some point I may switch to elemental for some questing, but I'm in no hurry to get to 90. I hope to be able to heal heroics with Calyx, and maybe even try LFR, so I figure I need all the practice I can get at being a healer. I've also not really enjoyed the elemental spec in the past, but I've been seeing a lot of high-dps ele shammies in LFR, so this makes me think it might get more fun at level 90. So I'm likely to give it a try- I really like the fact that I can swap between the two roles on a single toon as the mood strikes me.
Posted by Wapsipinicon at 11:10 AM No comments: 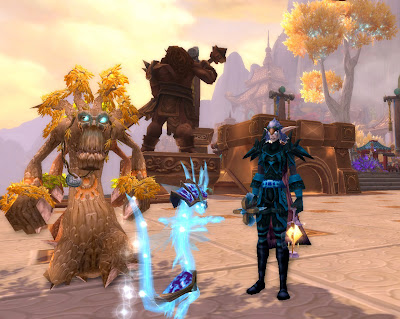 There have been some other blog posts recently about the sheer number of things to do in WoW right now, especially with Patch 5.2 about to drop. It can be overwhelming, but the moment of clarity comes when you realize it's kind of like a buffet where you can pick and choose, but you don't have to try everything. I've really been keeping that in mind this past couple of weeks, and as a result, my activities in game have been eclectic, but more fun than forcing myself to play through aspects of the game that I don't really have an interest in right now.

For example, I don't feel like doing dailies at all on Mnium. Instead, I am grinding a few BC dungeons for the Bloodfang recolor set. All she has left is Auchenai Crypts for the boots and Slave Pens for the belt. This weekend though I will run Mnium through the first two parts of LFR just for kicks. She doesn't have any Elder Charms but I don't really care. With drop rates improving and valor gear getting cheaper in the next patch, she'll get geared up eventually. 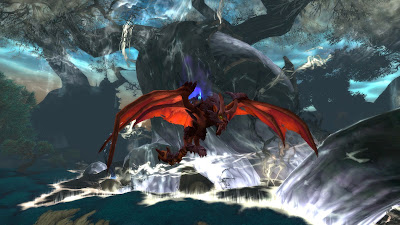 I am working towards getting Blatella the forsaken shadow priest exalted with the Klaaxi so I can see the end of the story and get the title. She has maybe 1-2 days left of dailies. I also ran her through two portions of LFR last week and she got a cape upgrade, and a belt that she didn't need. I didn't realize that the belt wasn't an upgrade until I had already gemmed it- oops. 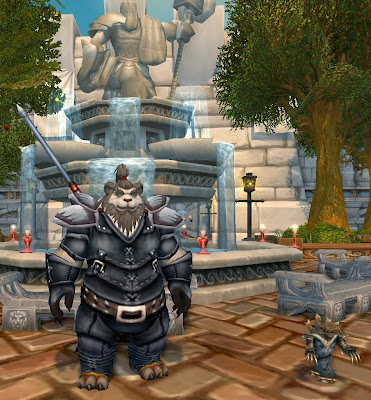 I started a monk and modeled him a bit after my boyfriend because I like the idea of watching him run around and punch things in the face. My bf requested that he be a ninja panda in black, so that will be his color theme while leveling. Jiaozi is up to level 21 and I plan to level him mainly through questing and exploring, with rested xp and the monk xp benefit. I have been doing some pet battles with him too- I love the little harvester pet!

Finally, I decided I wanted to play my elemental/resto shaman a bit after a really great episode of The Training Dummies podcast on everything shammy. She's at level 87 and I would like to level her to 90 through healing dungeons, and maybe heal through heroics too. I haven't included a picture of her because I have for some crazy reason decided that she needs to be a dranei now, so she is on her way to my Alliance group of Feathermoon. So I'm looking forward to healing some dungeons and pew pewing things in LFR this weekend!

Posted by Wapsipinicon at 10:37 AM No comments: 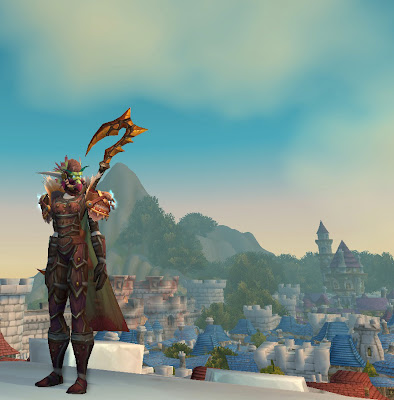 Work is kicking my butt this week, and I have only been puttering about in WoW. I'm still enjoying playing balance on Mnium, and she managed to scrape up enough gear to get into the first part of LFR. No gear drops yet, and she still could use upgrades from heroics, so plenty to do there. I can't, can't do Golden Lotus dailies right now so Mnium is mainly hanging around Halfhill working for the Tillers. She's close to having enough Valor for the Klaaxi belt so after that she'll start working on Golden Lotus. 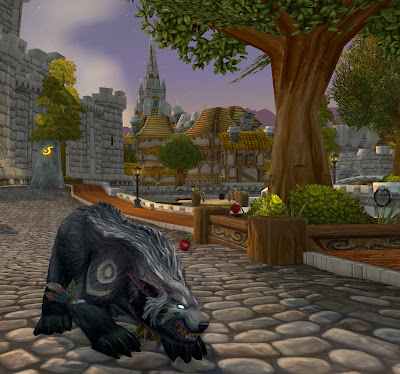 Mnium has nearly a full set of heroic gear for bear, her new second spec. If no one else in the heroic uses agility leather, she rolls need on it, which I think is fair. Just a couple more pieces and I'll start doing Operation Shieldwall dailies as bear, which I'm rather looking forward to.

Overall I'm still really feeling the night elf druid thing. All of Mnium's forms look cool, the night elf casting animations, which I can see thanks to Glyph of Stars, look totally cool, and thanks to strong self heals and CC I feel that Mnium is decently survivable even as balance. I like the complexity of the class and how well it fits in with the druid lore that I recently read about in the War of the Ancients trilogy. Mushrooms + Ursol's Vortex + Hurricane/Astral Storm to take out multiple mobs is a blast. I like having real AOE and self heals, something that my enhancement shaman is sadly missing. Still, I expect I'll return to my Horde side sooner or later, most likely when all the new raids drop in the next patch.
Posted by Wapsipinicon at 3:20 PM No comments: