So I'm not a tank 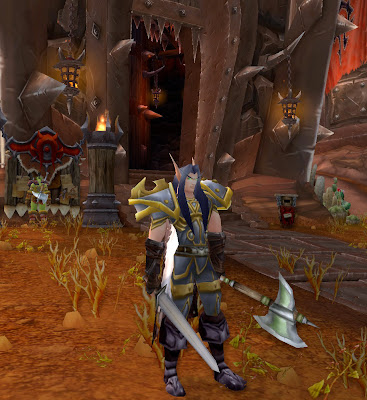 (I wrote this post before the holidays, but somehow it didn't end up being posted!)

It wasn't much of a surprise, but I found tanking to be super stressful. I don't have the skill to find that perfect point of pulling enough to keep the DPS happy, and not pulling too much and overwhelming the healer. Even worse, my spatial memory is terrible. I've run every dungeon in game a million times as DPS and heals and there are few that I could find my way through from start to finish. Anyway, I found myself wanting to play Petrusian but stressing about the tanking part. So I finally gave in a specced him to fury. I had always intended to have fury as a second spec primarily for the purpose of dual wielding 2 handed weapons with Titan Grip. And as it turns out, fury is a lot of fun. The all out destruction with two weapons reminds me of everything I love about my enhancement shaman, and the male night elf animations are pretty awesome. So fury it is.

Petrusian just hit level 40 and the next goal will be building a transmog set in lowbie plate. In keeping with Petrusian's Peter Steele theme, it's going to be green (Type O albums, and Pete Steele's entire wardrobe were always in themes of green and black). Another theme of early Type O songs is, ah... axe murders. So Petrusian will be dual wielding 2H axes- I like how the one he has now has a green tint to it, so I'll consider that the first piece of his green man transmog set. 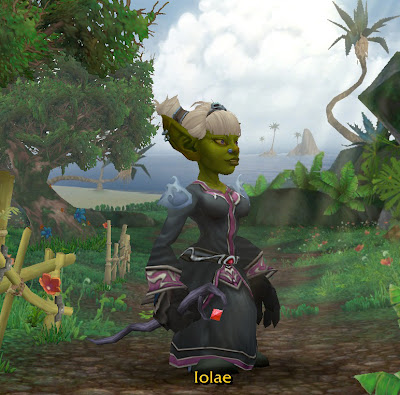 I seem to have caught the lowbie leveling bug again, and I even transferred over my Alliance warlock and frost mage to my Horde server. I've got it in my head that I need at least one toon of each race and class on my Horde server, and I've felt no motivation to play Alliance lately. So now I've got a goblin mage and orc warlock. I really debated making Iolae a blood elf for transmog purposes but I already have 2 blood elves and only 1 goblin who I won't play until I feel like I can put up with 5 levels of hearing "I don't have enough energy" 300 times on every fight. Iolae the goblin still looks pretty good in her night-elf transmog, and I still really like all of the goblin face and hair choices. 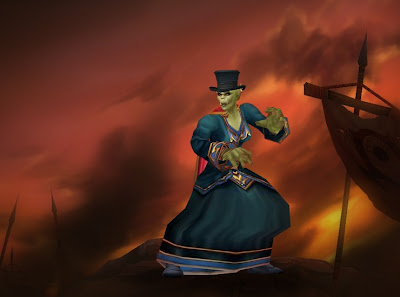 Beliele (spelled differently now) has transformed from a worgen to an orc. How awesome is it that she got to keep her top hat! At the moment I suspect she'll be chilling in Org, getting used to her new surroundings, until Iolae is finished with the cloth heirlooms.

My plan for the near future is to get Iolae and Petrusian to level 50 through LFD, and then attempt to plow through 50-60 on them through leveling. I don't think I can do the Black Rock Mountain dungeons again, and as much as I dislike Silithus and Blasted Lands for 55-60, I think they are the best options for leveling through this period. Overall I think this stretch is the worst part of the game, simply because there seem to be so few options for leveling (wonder if I'll eventually feel that way about Pandaria once the newness wears off?)
Posted by Wapsipinicon at 12:43 PM No comments: 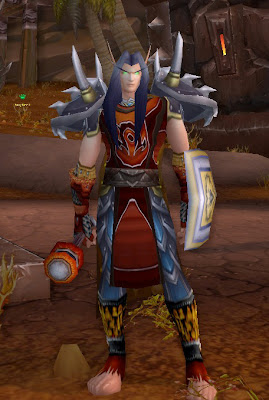 Dailies are starting to get a bit old again, so my Hordies have been out in the world looking for new adventures. Wapsi has been back at archaeology in search of her Professor title, in addition to a few pet battles. And I've rolled a new toon to try my hand at tanking. Meet Petrusian, barefoot protection warrior! 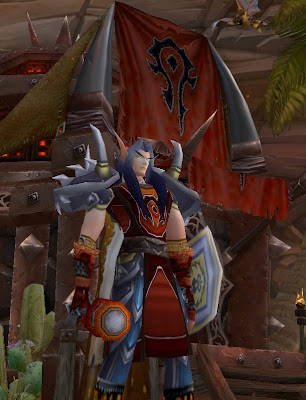 Some time ago, I noticed that some of the male blood elf models hold quite a resemblance to Peter Steele. Since I don't typically play male toons, this seemed like a good opportunity to do so, as well as to try to level a warrior for the first time. Peter Steele's first band, Carnivore, was styled around the concept of post-apocalyptic warriors, so this class choice seems appropriate.

I've never played a tank, but I'm not excited about low-level questing right now. The lowbie zones seem like torture after leveling through Pandaria; so slow, quests scattered everywhere, generally not very fun. The instant dungeon queues seem like a more exciting way to level Petrusian. So I've geared him with all the tanking heirlooms, specced him protection, and sent him out into the wilds of dungeon finder. I'm looking forward to hitting level 40 and plate specialization with him, so he can transmog away this clown suit.

I feel like I've been doing a pretty good job as tank, although I still need to work on positioning a bit. I am apparently too slow though, which is not a surprise, I do like to loot corpses and finish dungeon quests. Much to the dismay of GOGOGO DPS who will "help" me by running three rooms ahead in Stratholme to pull bosses. To my credit, I was able to round up the mobs as they poured into the room and went straight for the healer, and no one died. I know it's just a lowbie dungeon, but I felt pretty good about that, despite the complaints.

So tanking lessons learnt so far: 1. Go fast. 2. Ignore the chat window. We'll see if I can manage that for 65 more levels...
Posted by Wapsipinicon at 7:14 AM 2 comments: 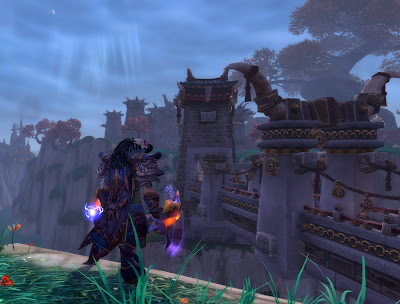 Wapsi is now revered with the Shado-Pan and honored with August Celestials. She's continued to be lucky in LFR and so now has two fist weapons from Gara'jal the Spiritbinder and the Tier gloves. She only has 4 blues to replace now, and grinding out VP for the Shado-Pan helm and Klaaxi necklace. An additional ring will hopefully come from LFR, and a trinket from Dominance Offensive when she gets to revered with them. And just for fun (and VP), she's running a few scenarios here and there for the pretty red mail Brewmaster's armor set. So far she's got the cape, helm, shoulders and gloves. Oh, and can't forget Halfhill, where's she's farming piles of veggies to level up cooking.

My previous dissatisfaction with playing melee has mostly disappeared. Wapsi is geared enough that dailies are not as perilous, and I've learned the fights in LFR and am not having so much trouble with standing in the poop (although Will of the Emperor #@#$@$!! I can not figure out how to get out of the way of those Devastating Arcs! I am thinking that maybe I need to pan my camera waaaay out for that fight as the bosses are so big that I can't see what direction they will swing in. When the notice comes through DBM, I pretty much just hop around and hope and I don't get whacked). 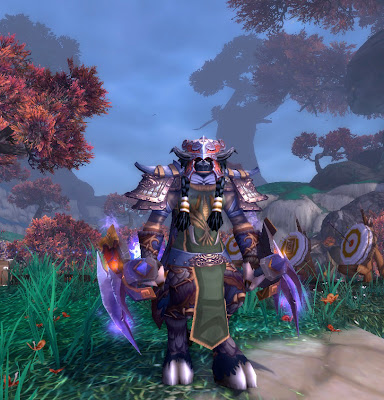 I really like the way Wapsi looks now, too. The gear this expansion is beautiful, and I've had no desire to transmog any of it. Fights also look awesome too, with those two big melee weapons smashing away. As nice as ranged classes are for slaughtering things in relative safety, it's never quite as satisfying for me as running up to bad guys and smacking them in the face.

I am enjoying the lore of the game more than ever before. The new Dominance Offensive dailies, and their tie-in scenarios, have been a lot of fun. I like that Garrosh is turning into a Lex Luther-type super villian. The lore in LFR has been amazing, and I actually got goosebumps during the battle with Empress Shek'zeer, although like Matthew Rossi I am also confused by the relationship between the Mantid, the Sha and the Mogu. On that note, Rossi's and Anne Stickney's Know your Lore columns for this expansion have been a fantastic complement to the game. Overall, the story of this expansion has more depth for me than anything previous, and it's really been a blast watching it unfold. 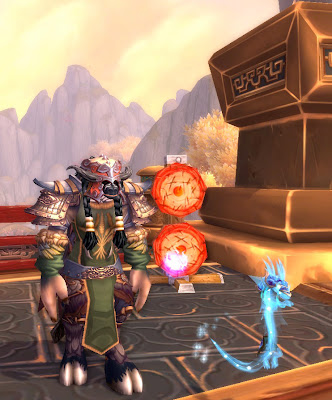 So Wapsi's efforts lately have been focused on progressing through the endgame content. Every so often however, she needs to take some time off for pet battles! I was close to 150 unique pets so one evening I sent Wapsi down to the southern tip of Eastern Kingdoms to pick up some new pets. I didn't bother with getting rares as for now I just wanted the reward for 150 pets, the celestial dragon. And here she is, woot! 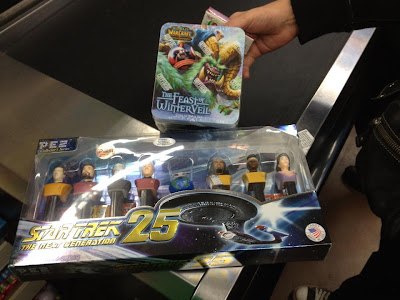 My boyfriend and I are nerds. We picked up this fine swag at WalMart the other day. The Winter Veil tin contained 3 TCG packs, one of which contained a pet, the Eye of the Legion! 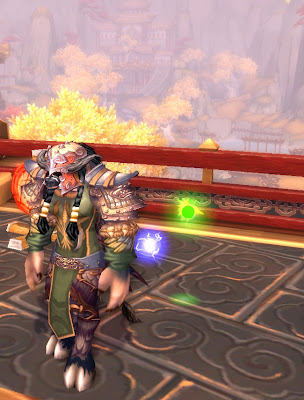 But lo and behold, it's kind of tiny and not terribly impressive. I was imaging it would be like the eye that floats around the orc encampment in Hellfire Peninsula. Oh well, it's a pet, but I'm really glad I didn't buy this particular loot card off of Amazon.

That's about it for the past week. In the upcoming week Wapsi will continue here Dominance Offensive and August Celestials dailies, and LFR and scenarios for valor and shinies. If there's time I'll run Blatella the shadow priest through a few instances as well. I'm not to the point where I really feel like repeating dailies on her, so her gearing process will be slow, but that's quite alright with me.
Posted by Wapsipinicon at 8:07 AM No comments: