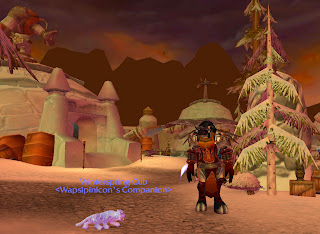 Wow, that was fast. Two heirlooms for 15% xp increase plus a smattering of dungeons and Wapsi is only 10 levels away from her flying mount (thankfully!). Sunday night LFD put Wapsi in Dire Maul and Scholomance once again, unfortunately didn't get too many good drops but she's picking up a few nice things leveling in Winterspring. And of course, she bought herself a Winterspring Cub too! 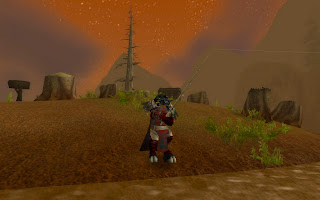 Finished up the night fishing for sagefish in the Stonetalon mountains and spotted yellowtail in Tanaris, for leveling up cooking and fishing at the same time.

In other news, I decided to faction transfer my worgen DK to horde, converted her to a tauren and respecced her as frost. I wanted to start playing her again as I've invested some time in her to get her flying mount, and I am anxious to start doing some BC dungeons. So, meet the new and improved Nachtmystium: 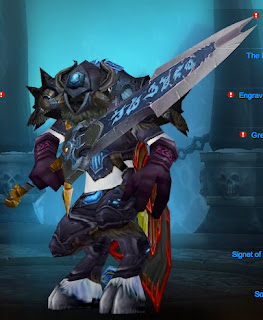 The helm is cool but I'm considering hiding it since Nacht has cool blue hair and pale skin which I think are particularly awesome for the frost spec. I'm also looking into dual wield for her since that seems to be the best weapons combo for DK DPS right now.
Posted by Wapsipinicon at 12:56 PM No comments:

Had a nice lazy Saturday hanging out with the bf and playing a little WoW. Wapsi worked on her professions (trying to get jewelcrafting to a point where she can make some money!), did a couple of battlegrounds, did a couple of dungeons. The dungeon finder put her in Uldaman and Scholomance, and both went very well (despite the remainder of the Scholomance group being what I imagine were teenagers who liked to say c@nt and make rape jokes). Wapsi's rotation is finally clicking with me: drop totems, hit Stormstrike and Lavalash and Earthshock for bosses; drop totems, hit Fireshock, Fire Nova and Lava burst for groups of mobs; use Lightning Bolt and Chain Lightning when everything else is on cooldown; and finally, squeeze in a heal spell if necessary (as it was a couple of times in Scholomance). Battlegrounds on the other hand were kind of meh. Rogues suck (but it makes me want to go back to my lvl 85 rogue Goetia and start doing some BGs with her!). 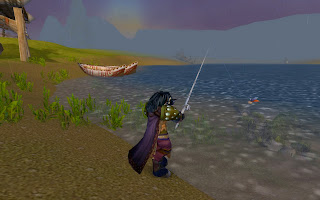 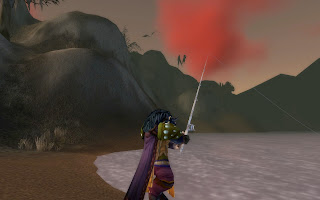 Aside from that, Wapsi spent some quality time fishing around home (Mulgore) and in Dustwallow Marsh (where she was sent by the Warchief's Command Board but didn't actually do any quests). Finally it was time to head back to Thunder Bluff to visit the shaman trainer and get some shuteye. 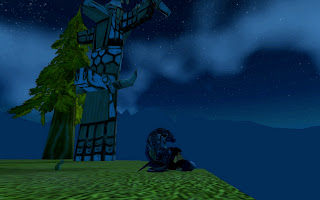 Posted by Wapsipinicon at 9:02 AM No comments: 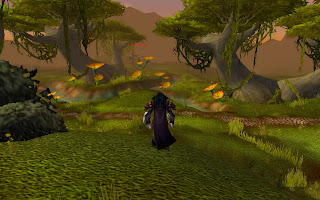 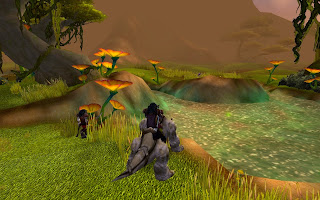 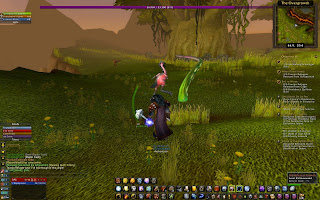 Working on a paper at work this week, so I've just been WoW-ing a little bit here and there. Wapsi ran Gnomeregan twice back to back in Dungeon Finder and did pretty well the second time- I'm remembering to set her totems down for every mob, which I don't have to do while questing. Last night I was able to do some questing in Southern Barrens, and I was struck by how beautiful the Overgrowth was, all swampy and green and overgrown with tropical flowers. Wapsi hit level 35 at the end of the Ruins of Tarajo quests, which I'm glad she got to do as a tauren. Pretty depressing, but ambushing and killing General Hawthorne in revenge kind of felt good.
Posted by Wapsipinicon at 2:20 PM No comments:

I play a lot of World of Warcraft. I began playing in the summer of 2008, with a Burning Crusade box set purchased on the advice of a coworker. I began my first toon, an Undead warrior named Carbuncle, and began questing my way around Tirisfal Glades. For some reason though, the game didn't capture my attention. I cancelled my membership and put Wow aside for the time being.

I picked the game up again in spring of 2011, when I found myself with a surplus of spare time after a breakup. I downloaded vanilla Wow and began playing Beryllium the night elf arcane mage on the Drak'Tharon server. At around level 30 and half a million ganks (Drak'Tharon is PvP), I deleted that toon too, and rolled a troll beast mastery hunter on the PvE server Drak'Thul. This time, the game clicked with me, in large part because I started treating it like my other obsessions and began reading everything I could get my hands on about the hunter class. I loved playing a hunter, too; still traumatized by the squishiness of my mage, I liked that I could send my pet into battle and blast the hell out of an enemy from a safe distance.

After buying the rest of the expansions and leveling my hunter up to about level 70, I finally got a bit burned out on playing that toon. She went though a couple of faction changes (to dranei, and then back to Horde as a goblin), was respecced as marksman, and now sits at level 72 in Dragonblight. Meet Galeena: 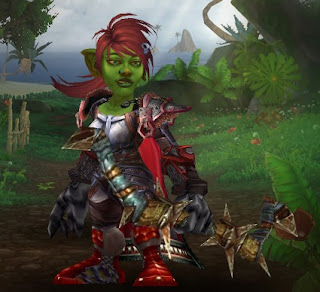 I do plan to finish leveling her eventually, just to say I did it.

Next up was a blood elf demonology warlock, who appealed to me for some of the same reasons as the hunter: a pet to tank plus ranged dps. I leveled the hell out of the warlock, reaching level 54 in about a week, until I got burned out on the slowness of battles: it seemed to take forever to kill even a single mob. So now my warlock sits in Orgrimmar awaiting her next command. Meet Fossegrimme: 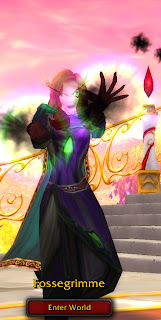 At this point I was ready for a melee toon who could rush right up into an enemy's grill and beat the hell out of it. So I rolled a goblin combat rogue and took her all the way to level 85 in a few months. During this time I also began to read obsessively about everything Wow, working on professions and exploration and achievements in addition to questing. I was still a bit afraid of doing any group play with her, so to this day she has never been in a battleground and has only soloed dungeons. These days she's kind of a worker for hire, doing Firelands and Tol Barad dailies for gold and Argent Tournament for heirlooms. Meet Goetia: 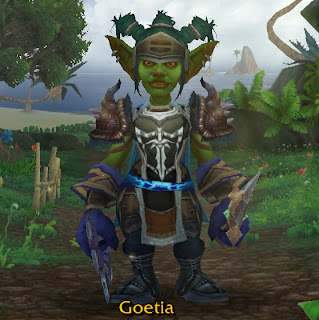 Dig that transmogged gear!
Finally, I decided to take the plunge and start playing the actual MMO part of the game. I rolled a tauren enhancement shaman so I could level her up primarily in battlegrounds and dungeons, choosing enhancement because after playing the rogue I was in love with dual-wield melee fighting. Just this past weekend I did my first battlegrounds (Warsong Gulch and Arathi Basin) and first dungeons (Ragefire Chasm, Deadmines and Wailing Caverns). Despite a couple of stumbles in the dungeons (shamans can rez other characters? That's what that button is for!), I had a great time and am looking for to the rest of the journey to 85 on this toon (currently level 27). Meet Wapsipinicon: 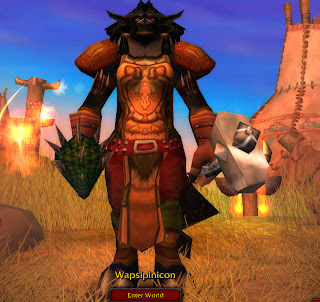 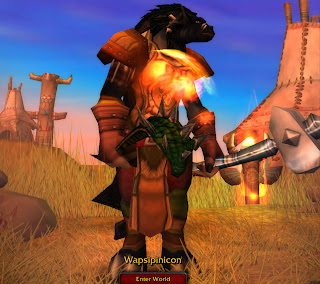 I love that Stinging Viper mace, acquired by beating down Lord Pythas in Wailing Caverns!
The semester just began (I work in academia teaching upper-level Biology courses) so my Wow time will be much less than it has been over the break, but I hope to run Wapsi through a dungeon or battleground each day, with a little bit of questing on the weekends. I'm also doing some literature research prior to beginning a study of nervous system development in tsetse flies, how cool is that?
Until next time,
Goetia (aka Sarah)
Posted by Wapsipinicon at 6:08 AM No comments: