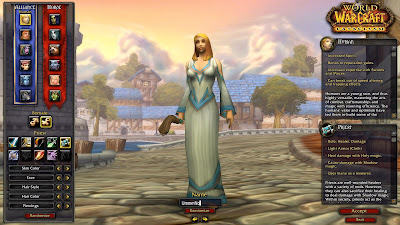 I'm having one of those evening where I don't feel like playing, so I'm reading blogs instead. Bravetank and Lyrestra at Musings of an Altoholic have shared their reverse bucket lists, in which they list the things they will probably NOT do in WoW. I have about a million goals in game, but until now I haven't thought too much about the things I'm likely never to do. I like to think that eventually, I'll at least try everything there is to try, but there still might be a few things that will never hold my interest enough to invest time in them. So after a bit of thought, and inspiration from Bravetank and Lyrestra (I share a lot of "nevers" with both of them), here is my anti-bucket list for WoW:

1. I have never rolled a gnome, dwarf or human. The races just hold no interest for me. Humans especially; I play a human IRL, so why play one in a fantasy game? And gnomes and dwarves are just little humans, IMHO.

2. I have never played PVP arenas or rated battlegrounds. I've done some PVP and it's fun once in awhile, but not enough to make it my focus in-game.

2. I have never raided heroic current content. I like learning how to play well, but the min-max game is a little much for me.

3. I have never done any raids aside from LFR. This is likely because...

4. ...I have never belonged to a guild of people that I actually got to know and enjoy playing with. Yes, I'm one of those people who accepts spam guild invites for the perks. I follow guild chat and participate occasionally, but I never seem to click with anyone. This kind of sucks, but since I really prefer to do my own thing when I play, it probably works out for the best.

5. I have never rolled a tank. I'm no longer so worried about screwing up in dungeons and getting abuse, rather, I could never lead a group because my spatial memory is total crap. I've run every dungeon in game multiple times but I still get lost every time and have to rely on the other players.

6. I have never rolled a warrior successfully. I've tried twice, and deleted them by level 15. They just don't click with me for some reason.

7. I have never leveled an Alliance toon to 85. I've tried, and still intend to, but my Alliance toons tend to get played a lot for a couple of weeks and then they languish for months.

8. That said, I have never understood the draw to rolling Alliance. Half of their races are kind of dull (see #1). Their architecture is bland as all get out- compare Orgrimmar to Stormwind, Thrallmar to Honor Hold, and Warsong Hold to Valiance Keep, for example. The Alliance cities look like prisons, and bore me so much that I have faction changed two toons to Horde after playing through these areas. Horde cities on the other hand are colorful and overall far more visually appealing.

9. I have never done more than a handful of quests in Blade's Edge Mountains or Shadowmoon Valley in Outlands. I really like the Burning Crusade dungeons, and tend to do a lot of my leveling from 60-70 in Dungeon Finder rather than questing.

10. I have never won the Stranglethorn or Northrend fishing derbies. I tried once in Northrend: when the winner was announced while I was fishing my 2nd pool, I figured this might be a lost cause.

So after all of this negativity, my next post should be my actual bucket list. Stay tuned...
Posted by Wapsipinicon at 7:44 PM