Is there a worse month than January?

I think not. Awful gloomy weather, and I always manage to get sick with one thing or another. Add some beginning of semester work stress and by the time classes start I am already worn out and ready for summer! My WoW time has become something I relish even more than usual, as working on all of my little tasks in game is very relaxing. All of my Hordies have been very busy, to the point where I'm feeling it might be time to play some Alliance for awhile just for a change. In particular, I want to get through Pandaria and the Operation Shieldwall story on my mage, since I've just completed Dominance Offensive Horde-Side (more on that in a second!) 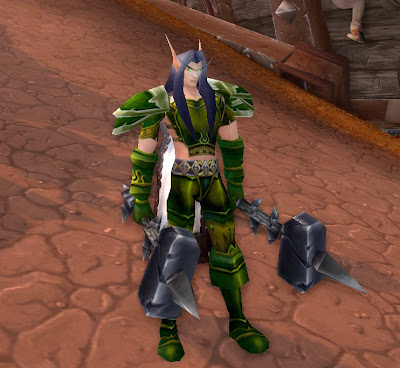 First up, Petrusian the fury warrior. He is nearly level 65 and can wear all of his green armor! Go green man! I am still loving the dual wielding 2h weapons, and the fury playstyle is, well, furious with a lot of procs to keep track of. I really like the pace at this point, and I am pleasantly surprised by how complex the rotation is this early on; I was under the impression that warriors were one of those faceroll classes. Not for me at least! 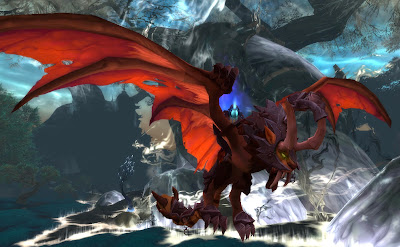 What a great creepy picture! Blatella has been hanging out in Dread Wastes, which suits this forsaken shadow priest just fine. She finished all of the quests for the achievement, and is now working on getting exalted with the Klaaxi, as I'm curious about the story and I really, really want the sweet "Wakener" title. Blatella has been keeping up with LFR, but after 3 weeks with only duplicate gear drops and no upgrades, I'm a bit discouraged. Looking forward to Patch 5.2 and the increase in gear drop probabilities that have been hinted at. I would also be happy if an upcoming patch allowed trading within the raid group, after gear is initially distributed. I've gotten duplicates, and today on Lei Shi heard a guy complaining about getting his third sha-touched weapon. I haven't seen one on any of my toons yet. 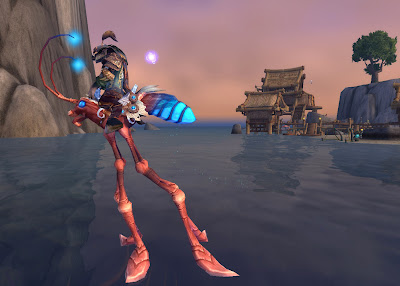 Wapsi has been busiest, having reached exalted with the Anglers and Dominance Offensive over the past few weeks. The water strider mount is officially my favorite mount ever. I just wish it could fly! 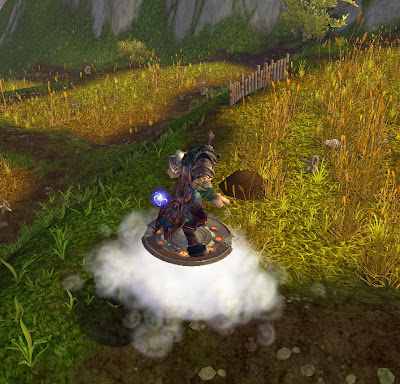 I don't know if I just suddenly developed a search image, but rich soil piles were everywhere a couple of weeks ago. No exaggeration, Wapsi found around 20 of them within about half an hour one day. 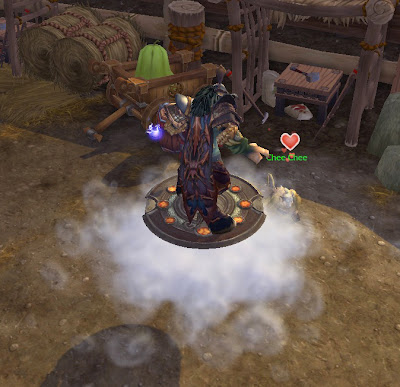 This was handy, as Chee Chee had been awful standoffish and Wapsi was only at acquaintance with him (she's been best friends with all of the other Halfhill folks for awhile). With so many piles of rich soil about, and a couple of plates of Valley Stir Fry, Wapsi was able to finally buy Chee Chee's love in a single afternoon. Now my farm has sheep! 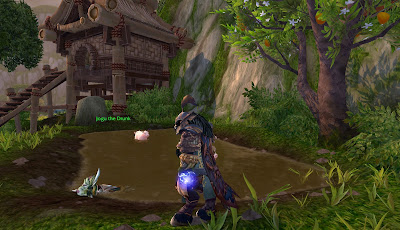 Speaking of the farm, Jogu has been a rather unreliable farmhand, to say the least. He leaves the farm for his pool by the market, and I have to remind him that he works for ME. I guess I shouldn't be too surprised, he is a drunk after all. 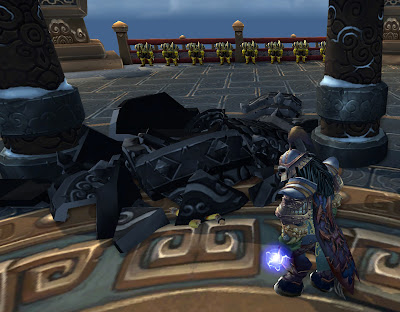 As mentioned, Wapsi completed the Dominance Offensive story line. I don't consider Wapsi a bloodthirsty Horde soldier, being tauren she's more neutral than evil. But after helping Garrosh obtain the equivalent of a nuclear bomb, and the final scene of the story (above), she's rather anticipating Garrosh receiving his due for escalating the war with the Alliance in such a way. 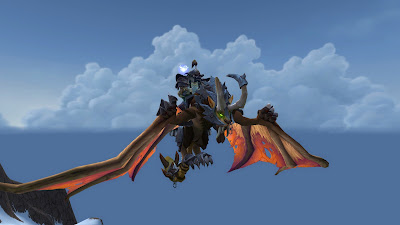 The story progression in this expansion so far is fantastic, and I am really looking forward to all of the upcoming content patches. The additions of LFR and these story-driven daily quests have really put the lore of the game at the forefront, and accessible. I can get all kinds of cool mounts and a legendary weapon, and really feel like my toons are participating in big, important, world-shaking events that are unfolding in real time. I haven't played enough MMOs to know if other games are like this, but it's a unique gameplay experience for me.
Posted by Wapsipinicon at 6:48 PM