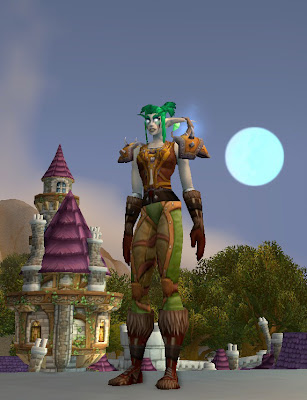 Mnium is a druid and a member of the Cenarion Circle, most recently stationed in Silithus. While she has performed her duties admirably, being stuck at a forgotten outpost against the long-conquered Qiraji threat has failed to slake her need for adventure, and the buzzing of the silithids has begun to drive her just a little bit mad. So to her great relief, Mnium has been sent to assist the Cenarion Expedition in Zangarmarsh, by way of Stormwind. 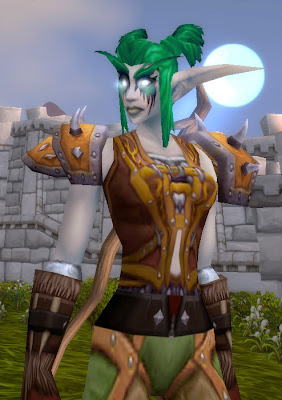 Mnium dresses simply and functionally, as befitting of a druid trainee. Still, she can't completely suppress her night elf heritage and tendency towards stylish fashions. The Stormwind auction house has provided her with a new jerkin and pauldrons that suit her. 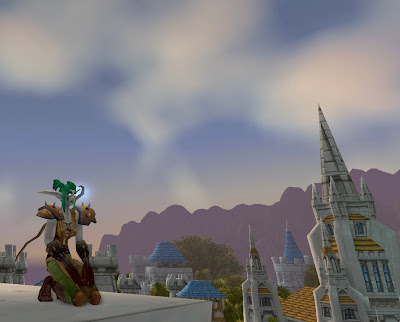 What a city! She mustn't dally here though, as she is needed in Zangarmarsh. She is young enough not to worry too much about the dangers of this strange land called Outland, and in truth looks forward to the challenge. Her mind is focused on a lofty goal, of someday becoming a Guardian of Cenarius. 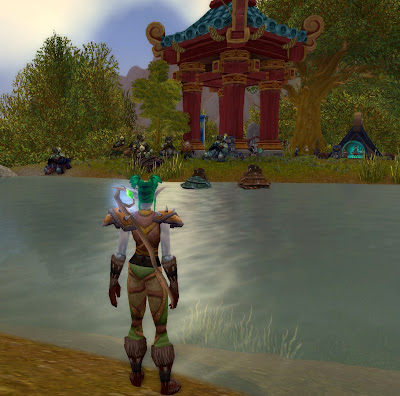 She has seen some curious things in Stormwind, further whetting her appetite for adventure. Pandaren? A new land? She has heard whispers just during her short time in Stormwind that this land contains a Well much like that which nearly brought the night elves to destruction in Kalimdor, and sure enough, there are rumors of a great evil afoot in Pandaria, fueled by the magical waters. Will the night elf druids be needed to help purge the world of this threat, too?

Mnium closes her eyes, breathes deeply and smiles. First Zangarmarsh, and her duties to the Cenarion Expedition. And perhaps with a job well done, she will make her way to this new land, just as she has done before. She has a whole life ahead of her for such adventures.
Posted by Wapsipinicon at 4:52 AM