A druid in Pandaria 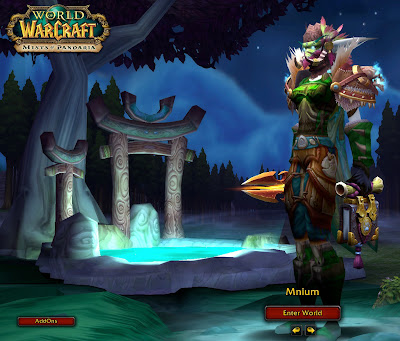 Mnium is meandering through Pandaria, in no hurry to reach level 90. She's mostly questing, and has gotten the achievements for finishing Jade Forest and Krasarang Wilds. I wanted to explore Krasarang with her because of the night elf quests, in which she assists the Sentinels in finding the Pools of Youth. Seemed like kind of a bad idea, given the history of the night elves and magical pools and immortality and all that. Mnium quested her way to western Krasarang Wilds, then up to Stoneplow, and then to Kun-Lai Summit to help the Alliance establish a base there. Now she's in Townlong Steppes and halfway through level 88. She'll probably help the Shado-Pan as much as she can in order to finish the quests in this zone. Since finishing Dread Wastes on my Horde priest Blatella over Xmas, I don't want to revist much of that zone so soon.

In addition to questing, Mnium has been doing a few dungeons, mostly as balance DPS. She spent all of the JP earned on some incredibly gaudy BC gear in Shattrath, as seen above. With her dungeon spell dagger and Binan Village quest off-hand, she is the most colorful druid in Pandaria! 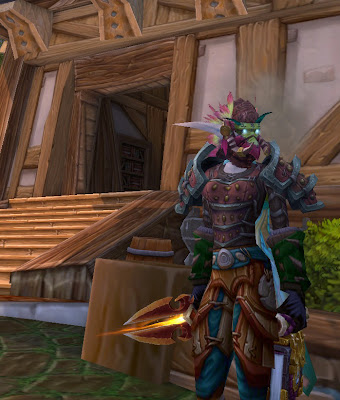 Mnium just got a couple of quest rewards in Townlong Steppes that have a pinkish hue to them, and they match pretty well with the help. Hopefully she'll get the whole set as she completes the zone- she got the entire Mortbreath set from Krasarang Wilds, which is a beautiful red and silver. I really like the return to more colorful, detailed gear in this expansion. It's really filling up my bank slots, though!

I'm still enjoying playing as Balance. I like throwing on Barkskin, planting some mushrooms, rounding up a few mobs at a time and casting Starfall on them, and using Ursoc's Vortex to keep the mobs in the toxic mushroom spores after I detonate them. This had made questing a lot of fun. Dungeons have been more challenging- healers still seem to be struggling in the 85-90 dungeons. After nerd raging a couple of times this weekend I switched Mnium to Resto for a dungeon so I could see what the problem was. Turns out Resto druid is a lot more challenging than Resto shaman at this level. OOM + plus only two OMG spells on long cooldowns (Tranquility plus Tree form) + only one big heal with a super long cast time (Healing Touch)- I had a hard time keeping up in heavy damage. I  attributed part of it to having mostly low level questing gear, but still, it was painful enough that I don't know if I'll heal with Mnium again. Nuking things is far more enjoyable.

I figure that by the end of the week, Mnium will have hit level 90. I'm planning to start her Operation Shieldwall and Tillers right away, in addition to some heroics and scenarios until she can get into LFR. Revered with Operation Shieldwall provides access to valor belt, boots, ring and trinket, and hopefully Mnium can fill the rest in doing LFR. I don't think I can do Klaaxi and Golden Lotus dailies for a third time, at least not right now. 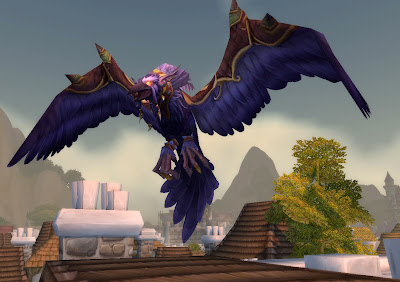 Throughout her leveling, Mnium has been making a few trips to level up her herbalism. Between selling herbs and the generous Pandaria quest rewards, she finally has a little money to spend. So she splurged on fast flying- I love the new flight form, and can't wait until she can fly around Pandaria too!
Posted by Wapsipinicon at 8:52 AM