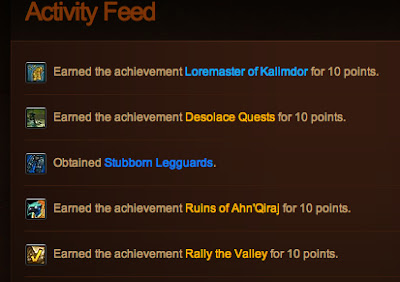 And now Kalimdor and Cataclysm zones are completed for Loremaster! My baby night elf warrior Marrion finally finished up Desolace and I was happy to get her out of there. For the previous loremaster zones, I've often finished up the questlines to see what happened, but the Desolace questline seemed awfully scattered and I was just ready to be done with it. In contrast, I really enjoyed Darkshore and Stonetalon Mountains. Playing through them as a night elf I felt particularly invested in the story of the destruction wrought upon their lands seemingly from all sides. 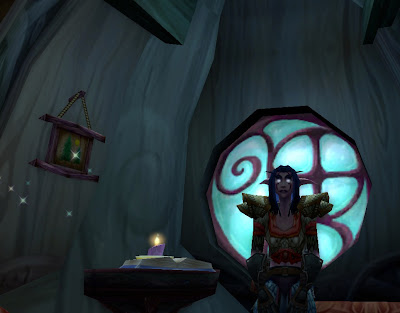 Having done their part for Loremaster in the old world, my lowbie warrior and hunter will now be hitting the dungeon queues and working on their professions until they can make the journey to Outland at level 58.

My other achievements this week were with Wapsi, because after struggling through leveling and getting ganked on the PVP server my lowbies are on, it was nice to run around on a geared toon and without fear of sneaky Hordies. 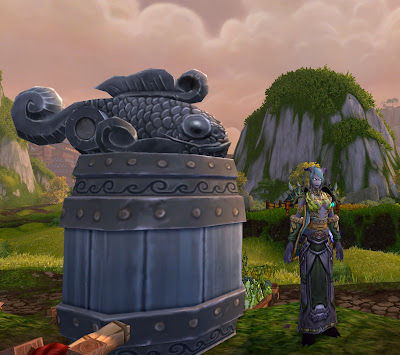 Wapsi's working on her farm to finish getting to exalted with the mainland Pandaria factions. It'll take awhile but I'll take it over the dailies. She's halfway through honored with Kirin Tor Offensive so she'll want to finish a few dailies with them as well as running ToT LFR for Shado-Pan Assault. I'm in no hurry to get her through this content, but I will do it eventually to see how the story plays out.

Wapsi also finished up the final questline she had left in Valley of the Four Winds- the Nesingwary quests. I hated them. The Nesingwary quests of the past have always been notorious for asking you to kill lots and lots of harmless creatures, but this iteration seemed particularly bloodthirsty and meaningless. So having completed the Valley quests for the achievement, I can safely say I'll never be visiting Nesingwary in Pandaria again. 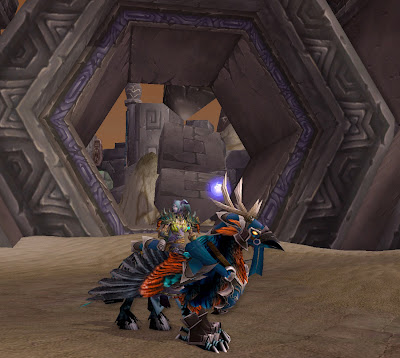 I've been wanting to get the Guardian of Cenarius title for awhile too, and since Wapsi already reached exalted with the Cenarion Expedition for the hippogryph mount, she's now working for the Cenarion Circle in Silithus. She completed the Ruins of Ahn'Qiraj this week, and I'm going to try the Temple of Ahn'Qiraj although as an intended 40-man raid I assume it will be much more difficult. Still, the Ruins were a faceroll so I'm hoping she can get through most of it.

I've been enjoying logging in each evening and just playing however I feel. Having a bunch of alts means that each one of them offers a little something different, so I'm still feeling like I have a lot that I want to do. Getting out of the endgame grind for awhile was a good choice for me.
Posted by Wapsipinicon at 12:50 PM