Down 1.3 million in just the last quarter, according to MMO Champion. I've read a lot of blogs today that discuss the meaning and implications of this decline, and for the first time the majority of comments don't consider this a minor loss for a game with a still-heathy subscriber base. Players of all types seem to be considering that WoW may not be healthy right now. What differs, however, are opinions regarding the cause. Everyone seems to be discontented with a slightly different aspect of the game as it stands now. 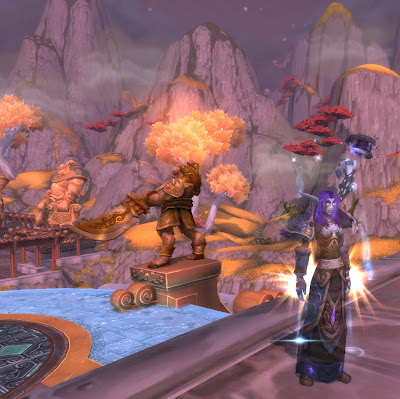 Speaking for myself, I have felt over the course of this expansion that endgame play is enjoyable only in small bouts. Rep grinds and dailies + the RNG of LFR make level 90 play feel too much like a job. Perhaps others feel this way too, as reflected by the statement, also on MMO Champion, that many players charge through content and then unsubscribe until something new is released. The current endgame model cultivates burnout. 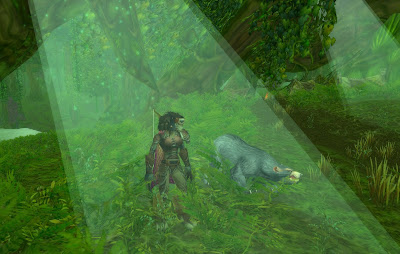 I still play in part because WoW is the best MMO option for a Mac user, but primarily because I love the lore and the visual aesthetics of Azeroth. I love the way the game interlocks with the book and comic series, and I think this is completely unique among the current MMOs. Due to this fact, WoW is also the first game I have ever played where I have been able to become personally invested in my characters, a feeling that builds as they explore the vast world from the starting zone to Pandaria. I really enjoy acquiring new skills and better gear, as well as improving my own skill through leveling. I am a 40-something woman with a stable career and home life, with bills to pay and pets to feed, and the role this game plays as an outlet for my imagination plays a big role in my day-to-day stress relief. But this feeling is lost when my toons reach level 90, and I feel they are no longer exploring but slogging through repetitious tasks for little reward. Just like a job, and a crappy one at that! Soon I give up on them and start another toon so I can return to feeling like a simple adventurer out in the world but destined for bigger things. 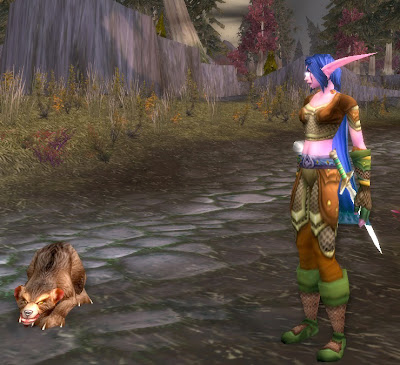 In the games I play, I'm looking for a beautiful world full of novelty and excitement, where I can imagine I'm part of a larger unfolding story. Leveling through Azeroth provides that in spades. If I engage in a grind where the novelty is lacking, I at least want it to provide reliable rewards at least every time I am able to log in each day and devote my time to the task. Questing is excellent for that, but repetitive dailies are not, and LFR failbags are definitely not.

I'm finally working seriously on Loremaster right now because adventuring and exploring all of Azeroth is more appealing to me than doing one more daily quest, even though I've just barely touched the Isle of Thunder story on my level 90s. And I've already thought more than once that when I have that title, aside from checking out some of the older raids, I might be about done with what I want to achieve in this game. Once I've explored everything in the world, and if new content continues to consist of endless repetitions at endgame, I find it hard to see my interest in the game being sustained. 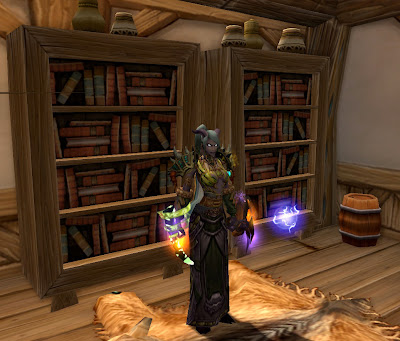 It's hard to offer potential solutions to these issues in my gameplay, because as I said at the beginning, everyone enjoys different things, and based on this, everyone has different ideas for what needs to be changed.

So again, I speak only for myself in saying that the number one thing that would improve my enjoyment of endgame would be to increase the frequency of rewards. Each day when I complete my dailies with one faction, I want to get a letter from Jaina or Taran Zhu, like we got during the Shieldwall/Dominance story, but including some substantial reward (as in, not 28G 50S). Each LFR I complete with no drops I want a similar letter. I want to feel a sense of accomplishment, both in terms of participating in the story and in terms of acquiring something that will help my toon do her job in conquering evil.

The novelty issue is more difficult. The current model of frequent patches consisting of repetitive content is a recipe for burnout and is clearly not working. Switching among alts might keep things fresh, but despite the changes made for alts grinding faction rep, it's still a long haul and coupled with the frequency of running a week's worth of LFR without a single drop, and the gating of faction rewards with valor as well as rep, not an enjoyable way to spend one's gaming time for more than one toon. The endgame content as it stands is just not repeatable. There are few options for generating novelty across multiple toons, but realizing there are limits to just how much new content Blizzard can put out, I just hope that someone smarter than me (and smarter than the current dev team) figures out how to put a new shine on the endgame.

That's about all I have on the topic. I'll be merrily playing my Loremaster team through the upcoming weeks, and then we'll see where I go from there.
Posted by Wapsipinicon at 1:53 PM