The state of my game

I'm still playing WoW, still looking forward to my couple of hours each evening to dive into Azeroth and away from the cares of the real world. But I've shifted my gameplay in a few significant ways.

First off, I'm turning my back on the Horde until Garrosh is gone, or until I feel like playing a toon I can think of as being somewhat accepting of Garrosh's activities. My death knight, blood elf warrior or orc warlock perhaps. I couldn't imagine Wapsi, as a tauren, not being disgusted by the events of the Dominance Offensive storyline. So she joined my shadow priest and my other Alliance toons as a Horde defector. 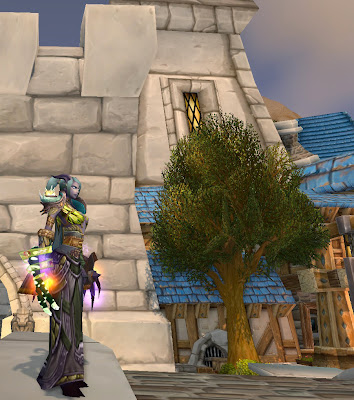 Soon after arriving in Stormwind, Wapsi finally got her sha-touched weapon and moved on to the Isle of Thunder. But there she stalled. I still don't feel like doing dailies. I still don't feel like running LFRs for 8 hours a week for on average 0-1 drops. Add in 3 more level 90 alts and that's 3 times more of stuff I don't really like to do, at least not right now. I needed a change.

I've been reading a lot of lore lately. Tides of War was great, and it made me dislike the Horde even more, if not for being outright evil then for letting Garrosh go on and doing little aside from muttering in the background. I began to really identify with the Alliance heroes, especially Jaina and Varian and Anduin. I am anxiously awaiting their final clash with Garrosh at the end of this expansion.

Although I was more interested in playing Alliance than ever before, I couldn't get into my partially leveled toon. I wanted to experience the Alliance from the ground up, savoring the lore along the way. So I rolled a new toon on a faraway, low population PVP server, no money, no heirlooms, just making my way in the world of the Alliance, where the Horde is only the enemy. 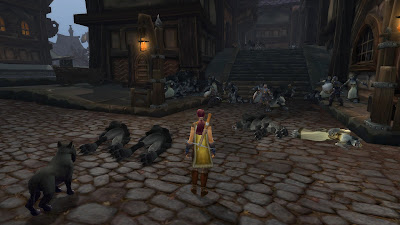 Anamosa may or may not have taken the Worgen curse willingly. But as a hunter, she finds that her new animal side greatly enhances her bond with her pets, and with her prey. 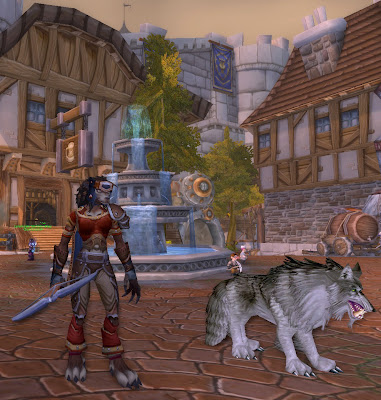 Oh, how I wish that hunters wore mail from the start, as her low-level quest rewards are perfect for a hunter out exploring the dangerous world! At least the vicious stable of pets she's tamed will always be with her.

Anamosa and two more toons I will be creating soon will be picking up the remaining zones I need for the loremaster achievement. I'm hoping I won't poop out on that goal like I have before, and that questing through zones here and there on different alts will keep it from becoming a grind. 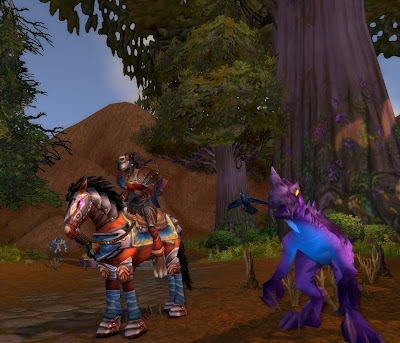 Last night Anamosa ran all over Kalimdor picking up flight paths on her way to Feralas for her next bout of questing. I had a blast mining ore, taming pets, seeing the sights, and ganking the occasional forsaken rogue who shouldn't have picked a fight with me. I have to say that at the moment, playing on a PVP server is pretty fun. It heightens the feeling of being out in a dangerous world full of conflict, and as for the level 90 griefers, I'm keeping a little book so that Anamosa can visit them sometime down the road! And there might be one tauren druid who will be getting a few letters from a level 1 goblin... 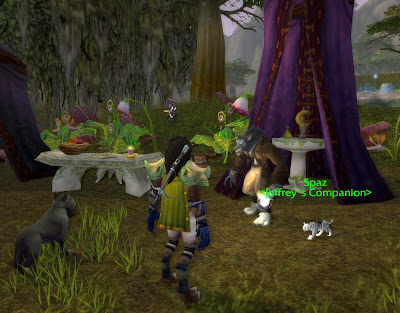 I'm trying to notice all of the little things too. After paying a lot more attention to the Anamosa's Gilnean history, I like seeing the the night elves and worgen are allied together throughout the world. Anamosa can always find a fellow worgen at a night elf outpost. Here's Jeffrey Gregarius and his pet cat Spaz, which made me smile.

I'm immersed in all that I love about WoW again!
Posted by Wapsipinicon at 1:36 PM